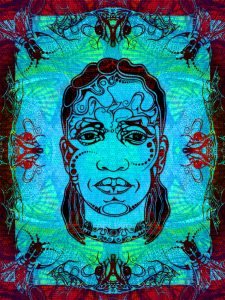 Me an Gee have been chat friends for over 6 years, and I was so happy when she accepted to be on my project. During my trip to Uganda in 2020, I was supposed to go to Mwanza, Tanzanya, as a part of my project, to investigate more of the LGBT challenges around East Africa, but Corona situation started exactly at that time, so even to this day I never managed to meet her. I really hope this will happen soon. Here’s her story:

Since I was at very young age, in Tanzania, I felt that I was different from other girls my age. I used to enjoy doing activities, which according to my society, should be done by boys. Therefore they used to tell me offensive words, and I felt so defenseless at that young age.

I grew up in a society where being gay is illegal and sinful. I spent decade trying to “fix” my sexuality. All those years I kept on telling myself, that being gay is in my desire and it is not who I am. I did everything I could to be straight. I was afraid that what I felt was against God, because that’s what I have been hearing in church. I am afraid that if I was myself and the society would found out, I would end up in jail. I am afraid that if I come out to my family, I will shamefully die alone.

I was raised in a Christian church. It wasn’t easy when the preachers where preaching that being homosexual is a sin. I was asking myself, what is wrong with me? Why am I not like others? I felt alone, I lived in fear. What if my family, friends, teaches and fellow students will find out? What about the society?

My life was unhappy, I was lonely. I believed that no one would understand me and accept me. I had a depression and kept on trying to force myself to be straight. One day I felt like I had enough, I was tired to not be myself, I was tired to of trying to please everyone while my life was keeping on getting worse and worse. And then I chose to be happy. I accepted that am a woman who loves women and that is not going to change.

Accepting myself was very big step in my life. I felt free, it was like I broke all chains which tied me for years and now I can love who I want, at least I gave myself that.

The challenge was where to find a partner. It felt like I was alone at my own island. I didn’t know how and where to get a partner. I was telling myself maybe they are out there, but hiding, afraid of what the law and society will do to them when they found out that they are gay.

The important thing now is that am happy because I have accepted myself, though I have to hide to my parents and society for my own safety. I have few friends who are like me. We have secret meetings and are there for each other. I have hope that one day it will be alright for everyone, if not in this generation, then the next one. This world should be safe for everyone.

Most of young LGBT community is living in fear, hiding their identity because it’s illegal to be homosexual in Tanzania. Not only the government, but also the society is not comfortable to participate in social activities with homosexual people. Me and some of my friends from Mwanza, Tanzania, decided to create a group for young LGBT people, which will be involving LGBT members around town who are hopeless, rejected and lonely.

The reason we want to do this is because we want to help LGBT members to socialize and participate in activities. The most important thing is helping the group members to not feel alone. It will help them to unite, to accept themselves and engage in activities like lessons of dancing, cooking, hand craft and different other practices. We believe that by doing this, we will help the young LGBT community members to not get into depression and to prevent suicide. They will not be hiding feeling alone but instead participating and learning things, which could eventually be a source of income to them, if no one will want to hire them because of their sexuality.