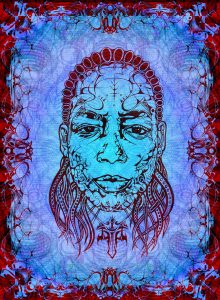 Me and Jay know each other for about 7 years now. He is one of the most determined and bravest humans I have ever met. I wish we could have had more time together before Corona situation came, but I hope it will still be possible in the future. Really looking forward. Here’s Jay’s story:

At the age of 5 to 6 years, I realised that I was different from the rest of my sisters, the girls in our neighbourhood and those at school. What they wanted as girls I didn’t like it. I liked different things. Like when they were playing, they liked dolls, they played dodge games (kwepena), they liked cooking and me on the other hand I liked playing football with the boys, riding bicycles, driving small cars made out of wires and when we played Mum and Dad games, I would be the Dad. I also liked putting on shorts and trousers, and sometimes I would steal my brother’s clothes and put them on.

As time went on, one day I asked my mother why my brother pees while standing and why me I have to pee while squatting. She told me that “you are a girl and your brother is a boy, girls squat while peeing and boys stand”, I told my Mum that from that day am a boy, and am going to start peeing while standing. She was so furious and she told me not to do so, but in my heart I had already decided. So every time I wanted to pee, I would go, remove all my clothes, stand and force myself to pee like a boy. Funny but yes, I did it.

I managed to finish my high school, and I was scouted and awarded a scholarship at a university in Uganda to study and play basketball for the university team. In my first year on the university team, I was chosen to be the captain for the team. All went well until my third year when things went bad.

I was outed by one of the televisions in Uganda and this went viral. University where I studied got to know about me, and they expelled me from the team and the university. This was a turning point in my life. This was so horrible for me, and a lot went through my mind during this period of time.

In my mind, I decided not to give up. This motivated me to come up with a queer basketball team. We managed to register and participate in the Uganda league through harsh conditions, and we never gave up until now.

With this queer basketball team, I have managed to advocate for the participation of LGBTIQ people in sports, and a lot of teams in basketball have started to embrace LGBTQ persons in their teams, though they just don’t want to say it and accept the reality.

I also founded an LBTQ organization called Fem Alliance Uganda and we are doing a lot of work to advocate and do human rights work.